It was just a few weeks before the start of in-cosmetics Latin America 2022 when we visited the FarmaMake group in São Paulo. Run by Flávia Rocha, the Brazilian beauty conglomerate consists of companies such as the traditional Farmaervas, TB Make, Tracta, and Mari Maria Makeup, among other well-known cosmetic brands in the Brazilian market. 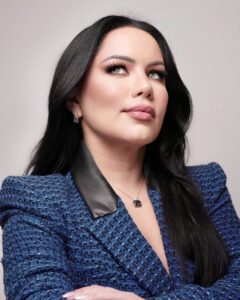 On that day, we had some major items on the schedule: besides making the final arrangements for the group’s talks at in-cosmetics Latin America, we would personally interview Bruna Tavares, journalist, digital influencer (with over 5 million followers on her Instagram accounts), and founder of the cosmetics brand of the same name Bruna Tavares (BT), which is also part of the FarmaMake group. In this meeting, we officially invited Bruna to participate in in-cosmetics 2022, and she accepted.

To get to the group’s meeting room – a super cosy “instagrammable” environment – we crossed a long corridor with plenty of laboratories and different teams working on cosmetics research and development. In one of these laboratories, exclusive to the BT brand, the entrepreneur Bruna Tavares invests many hours of work, participating directly in the development phase of exclusive products for her brand. In 2022 alone, there will be 15 launchings and 69 new SKUs, besides BT’s entry in the skincare category with the Cherry Blossom line.

Before we started the interview, Bruna told us, giddy with excitement, that she recently volunteered to be a “citizen scientist” in NASA’s asteroid-hunting programme. “I have become an asteroid hunter. What we do is: we analyse images in search of significant asteroids and report back to Harvard. The other day, my captain said that she could analyse my images if I didn’t have the time. But I replied that she had no idea who I was. If I get into something like that, I take the bull by its horns. I start it off to save the planet – that’s the goal.” the entrepreneur teases.

The surprise we had at finding an “asteroid hunter” is just an appetiser of Bruna’s trajectory. She started in the beauty universe in 2009, when she graduated in journalism at PUC Campinas, in the countryside of São Paulo. She had a meteoric rise in the following years, with the creation of the blog “Pausa para Feminices”(“A break for femininities” in free translation from Brazilian Portuguese) and also the launching of her cosmetics brand in 2016. Nowadays, BT is known nationally and has an excellent performance, with a turnover that exceeds 30 million dollars per year.

When she graduated in journalism, Bruna took advantage of the knowledge she already had in blog creation – due to a project developed during her degree – and decided to invest in a blog with topics focused on culture, fashion and beauty, with the aim of networking. With time, she noticed the growth of the beauty section and led the blog to this area.

“I have always loved make-up. My mother loves red lipstick – she was a banker and used to go to work every day wearing this colour – it was her trademark. In addition, I also took up theatre from a young age, so make-up has always been a place of empowerment, self-esteem and art in my life.” the businesswoman explains.

Bruna started out writing make-up reviews and her blog grew at the same time as her career as a journalist. As a reporter and editor of well-known portals and magazines in Brazil, she got to know the press officers of all beauty brands. It was talking to one of them that turned her career around.

The journalist learned that the brand Tracta was doing an unprecedented project in Brazil with influencers. Tracta, a reference in the Brazilian cosmetics market with make-up and dermo-cosmetic facial treatment lines, is part of Farmaervas, a pioneer company in the development of natural products, present in the Brazilian market since 1940.

Tracta chose 12 bloggers to develop a lipstick to be launched in a unique collection. Bruna was invited at the last minute because one of the influencers dropped out. Between the invitation and the lipstick creation, there were just 2 weeks: “I didn’t have time to plan, but I managed to get a buzz going on my blog, and I involved my public in choosing the colour and the name for the lipstick. The post about my participation in the project had a record number of comments, so I thought I would have to create a different lipstick colour that would please this public because they would certainly be the ones who would buy the lipstick”, the businesswoman says.

On the day of the creation in the lab, she presented the idea of making lipstick in neon coral colour, using the picture of a salmon fish as a reference. But she was very insecure when she saw that all the other bloggers had taken MAC lipsticks as references. Her colour was very complex, it took them a long time to get the shade and she went home feeling very unsettled. When her mother tried the lipstick, she said: “Bruna, I’ve never seen anything like it! Look how beautiful this colour looks on me”.

“My mother is very straight, so I felt that was a sign. I wanted that “WOW” feeling. To this day, when I develop a product, I go back to that place and seek that reaction from my mother. I always think about how the consumer will feel and react to a product: it has to be good enough to impact the customer, regardless of the campaign,” she explains.

Instead of receiving the commission in cash, Bruna asked for payment in lipsticks and started sending them to journalists and influencers as a business card and publicity. The lipstick was Tracta’s best seller and, in a short time, her blog skyrocketed from 4,000 hits a day to 40,000, which earned her new work partnerships, including with cosmetics giant Sephora.

At that time, what she earned from advertising on the blog was already higher than her salary as a journalist, but she still did not dare to leave the editorial room. In 2012, she developed a complete make-up line with Tracta, using the name of her blog “Pausa para Feminices”. In 2013, she stopped her work as a journalist and started to dedicate herself to creating new cosmetic lines and products, and in 2016 Bruna finally launched her brand, which bears her name.

Since then, BT has only grown. In 2019, it was already making 10 million reais and, in 2020, it launched the first line of foundations in Brazil with 30 different shades. Their success was so great that, in 3 days, they sold 200,000 units of the products, which helped the company grow 67% that year.

The line with 30 shades of foundation was a project that took more than 2 years to get off the ground. Even in such an ethnically diverse country, national brands only offered 9 to 10 shades of foundation. When Bruna noticed this gap in the market and the delay of products from abroad reaching the country, she decided to research and launch a national line that would better cater to the Brazilian consumer.

In 2021, a year of pandemic and crisis in the Brazilian and world market, the brand managed to grow 10%, reaching an annual turnover of more than 18 million dollars. In 2022, with a line that boasts 213 SKUs, Bruna Tavares’ BT projects to sell almost 6.5 million products and have revenue that will surpass the impressive $30 million mark, a 71% growth over the previous year.

At in-cosmetics Latin America 2022, Bruna took part in a panel on social media and influencers alongside founders of other beauty brands and representatives from TikTok’s beauty and personal care sector. At that time, she shared some moments of her inspiring story, highlighting the challenge of entering retail since, a few years ago, companies still did not understand how a brand with a blogger’s name could be successful. Only after partnering with Sephora did retailers open their doors to the brand.

At the in-cosmetics panel – which was packed – Bruna told the audience that product creations always come from market research and gaps. “We do the briefing based on the existing demand and deliver the needs to our lab. Nowadays, I already understand a lot more about the formulation, so we create together,” she explained.

When asked about BT’s next steps, Bruna Tavares makes no mystery: she tells us that soon the brand will present a new product that will offer different experiences to the consumer and talks about the brand’s internationalisation – which is already on its way. “I am constantly learning, and my challenge as a businesswoman now is to be able to think about the brand’s longevity without dehumanising it,” she concludes.

We end the interview by looking at an image of an asteroid that the businesswoman found for Nasa, named BTS003. We don’t know if she will find an asteroid of vital importance and save the planet, but we are sure that even the sky is no limit for Bruna. In this context involving space, Bruna Tavares is certainly a star that stands out in the constellation of brands and beauty business people in Brazil already, and soon she will also be known and recognised internationally.

Fly high, Bruna and BT! Our in-cosmetics community will always be watching you!

* BT’s turnover is in Brazilian reais. However, for this article, we have converted the figures into US dollars at the exchange rate of 13/10/2022