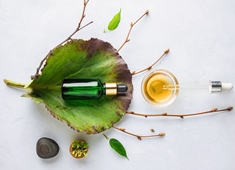 How do you know what will be the next hot ingredient in the cosmetic industry? If anyone could answer that question with certainty they could surely make millions. While there is no exact formula for figuring this out, it is helpful to look at a recent ingredient like Argan Oil that went from obscurity to popularity and compare it to a newcomer, Bakuchiol to see if it may become the next big thing.

Bakuchiol is a plant derived meroterpene that has antioxidant properties. It’s recently grabbed the attention of some brand marketers and is used in a hot new retinol serum at Sephora.

Must have a good origin story – Ingredients become popular for a wide variety of reasons, but one thing they all have in common is that they are supported by a good story. For example, Argan Oil which is one of the most recent “hot ingredients” in hair care, had a story of being obtained from the Argan Tree that involved the help of wild goats who climbed the trees and ate the fruit.  Bakuchiol is an ingredient derived from the plant Psoralea corylifolia which is an ancient cultivated plant of India and China. In fact, it is still being used for medicinal applications in China.

Is this a good enough story to make it catch on? That’s hard to say since there are lots of ingredients with a similar pedigree.

Must have some benefit – Of course, having a good story will only get an ingredient so far. There has to be some evidence of a functional benefit. Argan oil had the benefits of slip and shine like most other oils for hair.  It turns out that Bakuchiol has antioxidant activity and in a recent study in the British Journal of Dermatology worked comparable to retinol in reducing wrinkles. Since it is less irritating than retinol this has even led some to declare that it is the natural, safer alternative to retinol. Based on the quality of studies I’ve seen I remain skeptical, but other chemists and dermatologists are impressed.

Must make it online – Perhaps the most critical characteristic of a hot new ingredient is that it attracts the attention of the online community. In the days before Social Media and the Internet became ubiquitous, beauty editors at women’s magazines like Glamour, Allure, Cosmopolitan, and Elle were responsible for educating consumers about trendy new ingredients. Now, beauty vloggers, bloggers, and Instagram celebrities tell people about the latest and greatest ingredients. Influencing them are PR agencies and big beauty brands through advertising and special arrangements. If an ingredient is featured by a popular influencer and gets shared by their audience, it could go viral and become the next go to ingredient.

You can actually track the moment when this happened with Argan oil by looking at the data provided by Google Trends. Prior to 2009, there was very little interest and the search traffic for Argan oil was almost non-existent. Interest steadily built over 2009-10 by really took off in 2011 and it remains a popular ingredient today.

At the moment, online interest in Bakuchiol remains low compared to other ingredients like retinol or allantoin. But interest has recently edged out another anti-aging ingredient, flavonoids and according to Google trends, it’s growing.

Will Bakuchiol keep growing and become a breakout hit like Argan oil, or will it fizzle like Flavanoids?  That is the million dollar question.