The global male grooming market is expected to be worth $166 billion by 2022 – according to a report published by Allied Market Research – and the APAC region is one of the fastest-growing regions for the men’s make-up and grooming category, owing to increased demand from countries such as China and India.

One category – male make-up – is particularly thriving, and according to Coresight Research, APAC consumers are pioneers in men’s make-up, particularly in China, Japan and South Korea. Already more mainstream in Asia, make-up for men is gaining real traction in Western countries, including the US and the UK.

“The rise in men using make-up is growing at an incredible rate, as well as the number of people talking about the space. I would say that this is not a trend but rather a movement that will keep progressing… the next stage is to continue to normalise men in the make-up space to the point where the everyday man can feel comfortable and confident incorporating it into their everyday routines,” says Danny Gray, Founder of UK-based men’s make-up brand, War Paint.

Beauty for the boys

The word “make-up” carries feminine connotations and for decades the market has been dominated by products targeted solely to the female population. But that discourse is shifting, and behaviour is changing with it. “To locate make-up outside of this paradigm of cis-female beauty is liberating. It opens up the potential for make-up to be a creative, empowering means of self-expression for all,” comments Isabella Giancarlo, Co-founder and CCO of Fluide.

According to Euromonitor, 56% of US males surveyed admitted to using some sort of facial cosmetics like foundation, concealer or BB cream at least once in 2018. And over the past decade, Google searches around male make-up have increased by 67.5%, whilst data from market analytics firm, Moz, found that searches for ‘male make-up looks’ jumped nearly 80% in April 2020 compared to the previous year.

But male beautification isn’t exactly new. Centuries ago, Egyptian pharaohs used kohl around their eyes, and in more recent eras ‘guyliner’ has been popular with music and film stars including David Bowie, Prince and Johnny Depp.

“We know historically that the man’s use of cosmetics was pretty much the same as female use through the 19th century. Before the 19th century, this kind of very binary divide between men and women wasn’t really found in many societies. Then in the 19th and much of the 20th centuries, we got stuck with really different, sharp divisions between how women and men behaved. Now we’re reverting to where human beings have been for a very long time, [including] the usage of cosmetics,” Geoffrey Jones, Harvard Business School professor and the author of Beauty Imagined: A History of the Global Beauty Industry, shared in an interview with Refinery29.

Mainstream perceptions have begun to change since the turn of the millennium, but it has noticeably accelerated in recent years. David Beckham made the headlines in 2019 when he featured on the cover of Love Magazine wearing green eyeshadow. And in January this year, actor Ansel Elgort was photographed wearing glittery eye make-up to the Golden Globes.

In response to these high-profile expressions of male beauty, the John Lewis Partnership became the first UK high street store to launch a make-up counter dedicated to male make-up when it launched a pop up in January 2020. One survey conducted by male grooming brand, Wahl, even found that one in five men said they now use make-up. 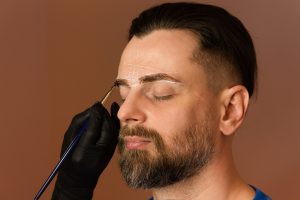 Big-name brands have taken note and launched new cosmetic products and lines in response to these shifting attitudes. 2018 saw a flurry of luxury brands bring men’s make-up into the mainstream including lines: Boy de Chanel, Clinique for Men, and Tom Ford for Men. In addition, indie brands dedicated to male beauty hit the market such as Stryx in 2018, and War Paint slightly earlier in September 2017.

Make-up brand MMUK MAN launched the world’s first men’s lipstick in June last year. With 12 subtly enhancing shades, the product is formulated to offer a natural and shimmer-free effect. The product was a hit in Asia and MMUK MAN amassed pre-orders for the product from China and Korea totalling £103,000. “Modern men are trying every trick in the book to help put their best face forward and are becoming much more open to trying new cosmetic products. Wearing lipstick is just a natural evolution of modern-day male grooming” comments MMUK MAN Group President, Alex Dalley.

The social influence of Gen Z

Known as the generation for actively disregarding gender norms and stereotypes, the world’s youngest consumers are unsurprisingly the one’s normalising men’s use of cosmetics and beauty products, driving the growth in this category. In fact, millennials aged 25-34 are the age group who tend to use it most, with 39 per cent saying they use make-up of some sort.

For the generation that has grown up with smartphones in their hands, presentation is everything. “The rise of social media, and just the ubiquity of it, should not be underplayed. You’re taking selfies and sharing videos and on FaceTime — meaning you never know when you’re going to need to be ‘camera ready,” comments Devir Kahan, Co-Founder of Stryx. Indeed, many of the world’s most successful male beauty influencers – such as Bretman Rock and James Charles – are under the age of 22.

Unisex or specifically for the men? 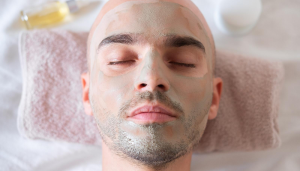 Unisex beauty has exploded, with gender-neutral brands from the big players such as Fenty and Milk to indie brands like Fluide and JECCA Make-up, making a big impression. As Geoffrey Jones says: “An industry that’s doomed is one that gets most of its use from only 50% of the population.”

Gender-neutral make-up perhaps helps to blur the lines and normalise male’s use of make-up. “I think a lot of people misconstrue a man wearing make-up as someone that is transgender or someone that wants to be a drag queen, but it’s not that,” comments Guitterez, Founder and CEO of Lunar beauty in an interview with CNBC.

But is unisex enough, or should brands directly target males in the way they do females? According to Jason Chen, General Manager for Chinese online retail site Tmall, “supply is not able to meet the demand for male make-up products” across China. In fact, male consumers want products specifically targeted towards them and are spending more on such products, compared to unisex beauty products, presenting an opportunity for brands entering this market.

“More and more products are being launched with men as their specific target,” says make-up artist, Kenneth Soh. “Brands are now doing skincare and light cosmetic products that are branded and packaged for men and take away the stigma of guys wanting to use products on themselves,” he adds.

The question also comes as to whether products should be unisex – when it comes to certain products, do men and women need different formulations? Andrew Grella, founder of New York-based male make-up line House of Formen certainly thinks so. “Men’s skin tends to be thicker and produce more oil, so formulations have to account for that,” he says.

Either way, it’s clear that the traditionally narrow vision of beauty is changing. In 2020 and beyond, make-up will be for everyone and will be expressed in a number of different ways, regardless of gender.

Also on the Road to in-cosmetics Asia Series…

Beauty & technology: ready for the future of cosmetics? | Episode 3

Gen Z: What do they look for in personal care & beauty products? | Episode 2

Personalisation within cosmetics and beauty | Episode 1