Plastic waste polluting the oceans has unfortunately become a familiar image but what about the pollution that we can’t physically see? 14,000 tons of sunscreen lotion and a total of 82,000 chemicals from personal-care products are estimated to wash into the oceans each year.

As one aspect of a wider trend that is resulting in more eco-conscious consumers, we have witnessed a significant increase in public, political and scientific interest in the effect of suncare products on marine life, in particular coral reefs. Google searches for “reef-safe sunscreen” more than quadrupled from 2014 – 2019, putting it firmly at the top of the personal care agenda. 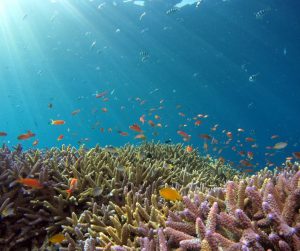 There is a widespread belief that some UV filter compounds within these sun protection products have detrimental impacts on marine organisms. “Pollution in the environment from chemical sunscreens can result in a reduced resilience to climate change events, and even contribute to reproductively impaired organisms, including coral and fish, that can go locally extinct in a matter of generations by inducing sterility and reproductive failure,” says Cheryl Woodley, Research Scientist at the US National Oceanic and Atmospheric Administration.

Indeed, many tourist hotspots around the world have passed laws against potentially harmful sunscreens. In 2018, Hawaii became the first U.S. state to prohibit the sale of sunscreen with oxybenzone and octinoxate which many researchers suggest are harmful to aquatic life. Similar laws have been passed in the US Virgin Islands, Bonaire Island in the Caribbean, the Pacific island nation of Palau and Aruba.

But in reality, we know very little about the effect of sunscreen on the environment. In 2018, The International Coral Reef Initiative released a report stating that much of the research to date is limited because it has been conducted in laboratory settings rather than in real environments and also focuses on individual chemicals, rather than sunscreens as a whole.

This concern is voiced by many others in the scientific community. In April 2021, researchers from the University of York noted that more studies are required on the environmental effect of sunscreen on coral reefs across the globe. Dr Brett Sallach, Department of Environment and Geography, University of York said: “Undoubtedly products that can help protect against the harmful effects of UV radiation on human health are hugely important, and therefore we need reliable and extensive evidence to suggest any changes or scaling back of these products”.

This area of increasing interest is certainly complex and driving demand for marine-friendly suncare solutions is challenging manufacturers and brands to formulate products that protect both the skin and the environment.

What exactly is marine safe?

So what does marine and reef safe really mean? Well, much like the research, these terms lack clarity. Whilst most consumers support the move towards environmentally friendly sun protection, it can be confusing to understand what this entails.

There is no agreed-upon definition for commonly used terms such as ‘reef safe’ or ‘marine safe’. These claims are also not regulated by the US Food and Drug Administration (FDA) or other worldwide governing bodies within or outside the beauty and personal care market, meaning the manufacturers of suncare products are not required to test if their products are safe for marine environments. “While brands have developed their own testing methods to put these claims on their packaging, they’re not all validated methods,” says clean cosmetic chemist, Krupa Koestline. With this lack of scientific regulation, many argue that the terms are simply marketing tools to ensure customer engagement and brand loyalty.

A closer look at the ingredients

Based on ongoing research, what many do agree on is that marine safe suncare products are those free of chemical ingredients which are likely to damage coral reefs and ocean life such as oxybenzone, octinoxate and octocrylene. Some laboratory-based research suggests that oxybenzone can increase a coral’s susceptibility to bleaching, damage its DNA, cause deformities and interfere with its hormonal process for growth and reproduction.

According to Craig Downs PhD, Executive Director of the Haereticus Environmental Laboratory, whilst these are the most widely studied chemical ingredients, there are other chemicals found in sunscreens and personal care products that could be harmful to the marine environment. Plus, of course, a lack of data and adequate research doesn’t mean a given ingredient is safe. 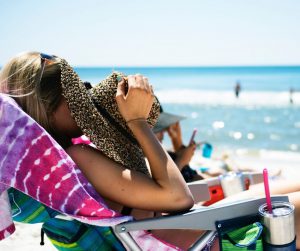 This research however only applies to chemical sunscreens which absorb harmful UV rays and turn the energy into heat. The other category of sunscreen is known as physical or mineral sunscreen, which works in a similar way whilst also creating a protective barrier on top of the skin to deflect and scatter incoming UV rays. Many people believe that these physical sunscreens are safer for marine life and coral reefs than chemical alternatives.

Thankfully, in April 2021, scientists at the University of Sheffield announced they have developed a more environmentally friendly way to make it. Instead of the furnace method which requires heating to more than 900 degrees celsius, solid zinc is placed in a vat with water and ionic liquid, a type of salt that melts at unusually low temperatures. The team believes the new method uses 97% less energy than the furnace method, and the process can be fine-tuned to deliver the crystal shape and size needed for different products.

And this is important because, it’s not just about the ingredient itself, but the size of it. Some mineral sunscreen formulas use nanoparticles of zinc oxide or titanium oxide which could still damage coral and be absorbed by other forms of marine life. To be safe, particles must be ‘non-nano’ – above 100 nanometers in diameter or more. According to Casper Ohm, a marine biologist and senior research writer at Water Pollution, reef-safe sunscreens “are made with bigger ‘natural-sized’ particles that are healthier for marine life and the local ecosystem.”

Concentration must also be taken into account. “Even if you have something relatively safe, having 5,000 people getting into the water at a single beach, the oils from most sunscreen products can induce toxicity,” says Dr Craig Downs PhD. A study he carried out in 2015 found that benzophenone-3 had a toxic effect on coral even at a concentration equivalent to just one drop in 6.5 Olympic-size swimming pools.

Where to go from here?

With such ambiguity, it can be difficult for consumers and indeed professionals in the personal care industry to identify the environmental impact of a suncare product.

Going some way to resolve this issue, in-cosmetics Global exhibitor, BASF’s Care Creations® has created EcoSun® Pass – a methodology that evaluates the environmental compatibility of UV filter systems in sunscreens. Specially developed for sun protection products, the methodology supports the transparent assessment of UV filters based on internationally recognised criteria and comprises eight different parameters, from biodegradation and aquatic toxicity to endocrine disruption potential. Plus, the scientific results are not limited to the BASF product portfolio; the platform can be used across the board as it evaluates all widely used UV filters transparently.

Dr. Christian Cremer, Director Global Development & Technical Service UV Protection, Personal Care Solutions Europe says: “As the world’s market leader in suncare ingredients, we want to support our customers in increasing the environmental compatibility of their products. Based on the latest scientific findings, our EcoSun Pass enables us to advise formulators already during the development stage, which UV filter combinations are best suited for their application – in the interest of both the consumer and the environment.”

As interest in the topic increases, so does the number of resources available. Haereticus Environmental Laboratory publishes a yearly list of chemicals and attributes in personal care products that can have a detrimental effect on aquatic and marine ecosystems.  Elsewhere, the Environmental Working Group produce an annual Guide to Sunscreens which includes more than 1,800 products with SPF, including more than 900 recreational sunscreens.

Visitors to in-cosmetics Global 2021 will also be able to access a wide variety of environmentally-friendly ingredients for sun care applications.  For example, global suppliers of UV filters, functional ingredients and other cosmetic raw materials, like Symrise, BASF and DSM will be displaying their sun protection ranges comprising eco-friendly solutions for UVA, UVB and ‘broad spectrum’.

The future of eco-friendly suncare

The part suncare has to play in the climate change debate is likely to continue as more research is carried out. “Sunscreen compounds may contribute to the background stress on corals, but so do other factors, such as nutrient pollution and overfishing, which are having a far greater effect. Sometimes there is a tendency to panic, and there is a danger that people will come to the wrong conclusions and take focus away from the real difficulties” says Prof Jörg Wiedenmann, head of the Coral Reef Laboratory at the University of Southampton.

Formulators and personal care professionals have murky waters to navigate when considering environmentally-friendly suncare solutions. But one thing that is for sure is sun protection will always be necessary. With the beauty and personal care industry constantly innovating and researching, we can hope the future is bright.

Interested in learning more about suncare? Take a deep dive into the effects of Vitamin D with Dr Barbara Brockway.